The Woman in White (unabridged)

Wilkie Collins is a master of suspense, but his transfer to audiobook requires a cast of readers to faithfully reflect the eleven different characters who tell the story. Walter Hartright, a drawing teacher to two sisters, wants to marry Laura, though she is betrothed to another. But who is the mysterious woman in white who he encounters? Naxos AudioBooks brings together a strong cast to bring alive the mystery and suspense of The Woman in White. Also available abridged.

The Woman in White, Wilkie Collins?s best-selling novel, a white-knuckler and a melodrama, has continued to transfix readers for almost 150 years. Naxos brings six accomplished actors to this story of subjugation, treachery and sleuthing. This is not a dramatized production but, rather, one made up of accounts related in sequence by the book?s characters, who are given voice by different actors. Glen McCready takes on Walter Hartright?s narrative, and his troubled, slightly vulnerable-sounding tone underscores that this particular drawing master may not be quite man enough to tackle the devious Count Fosco. For that, the story calls on Marian Halcombe, companion to Laura Fairlie ? the intended victim of Fosco?s ally, the odious Sir Percival Glyde. As Halcombe, Rachel Bavidge makes her native Tyneside accent a token of that admirable woman?s clear-eyed shrewdness and strength. Hugh Dickson reads the solicitor?s account and also that of the self-centered, hypochondriacal Frederic Fairlie, upon whose voice he confers a most glorious querulousness. Other parts are beautifully narrated by Marie Collett and Teresa Gallagher. And finally, Allan Corduner is the definitive Fosco, his voice resounding with the timbre of vainglory and projecting all the menace that is so terrifyingly incarnate in the Count?s vast frame.
Katherine A Powers, Washington Post

Written in 1859, this classic mystery is perfect for audio. Impoverished art teacher Walter Hartright accepts a position to teach at a country house and finds himself involved in a sinister plot to relieve heiress Laura Fairlie of her wealth?and her sanity. The tireless efforts of stalwart Hartright and Laura?s half sister, Marian Holcombe, help save the day. Each of 11 characters, easily identified in a handy cast list, tells his or her story, offering individual perspectives on people and events. The seasoned British actors in this full-cast production play the suspense and emotion to the hilt. Particularly fine are Rachel Bavidge as Marian Holcombe, a warmhearted woman of vast intelligence but no beauty, and Allan Corduner as Fosco, whose mask of geniality hides his true menace. Although it takes a while to fall into the story, this is an excellent rendition of a classic tale, old-fashioned storytelling at its best.
Joyce Saricks, Booklist 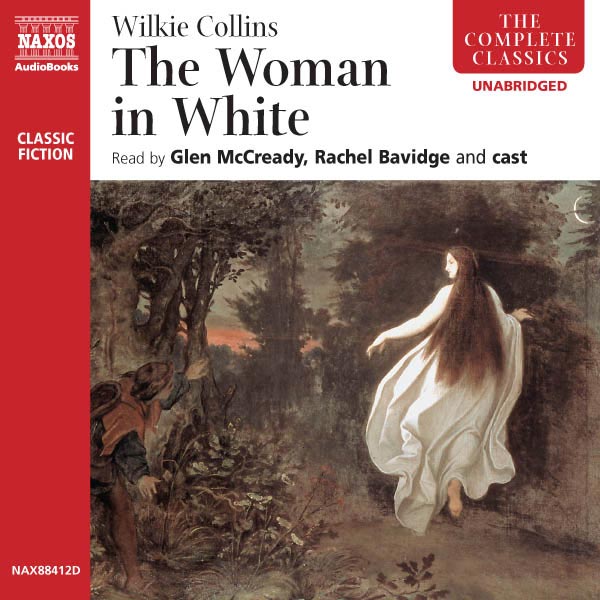