Germinal is one of the most striking novels in the French tradition. Widely regarded as Zola’s masterpiece, the novel describes the working conditions of French coalminers in the 1860s in harsh and realistic terms – it is visceral, graphic and unrelenting. Its strong socialist principles and vivid accounts of the miners’ strikes meant that the novel became a key symbol in the workers’ fight against oppression, with chants of ‘Germinal! Germinal!’ resonating high above the author’s funeral.

The 'shuddering volcano' are the coal mines of Northern France in 1860s, but the phrase applies to the whole of this blistering novel which was Zola's masterpiece published in 1885. The coal mines digest the human poor - men, women, girls and boys - slaving deep in the bowels of the earth for a wage frequently docked unjustly and barely able to support life. Desperately poor, these people strive to support their families which are constantly expanding not only by unwanted babies, but also by sick, old or crippled family members, spat out by the pits and unable to work. Meanwhile the pit-owners hold lavish dinner parties, plan their daughters? weddings and refuse to give to the destitute who beg at their doors.
When Étienne arrives in Montsou seeking work and lodges with the Maheu family, he shares the children?s bed along with Catherine, a 15 year-old pit-tram pusher, and their bond becomes the emotional focus of the story. The whole 19 hours? listening is a savage cry against the oppression and misery of the poor with ?tienne as Zola?s mouthpiece. It is his ferocity which drives the workers? strike which has such devastating results. There are episodes once listened to here which can never be forgotten: ?tienne and Catherine trapped in the swirling water of the collapsed mine; the wild, incensed mob brutally attacking the baker who had previously charged sexual favours from the daughters of desperate families in exchange for bread.
There is however hope. Germinal is the seventh month covering parts of March and April in the Revolutionary Calendar. It is the traditional time not just for social uprisings, but for the burgeoning of new shoots and germinating seeds which will bear fruit. These conditions will change, the volcano will erupt, new birth can follow.
Naxos is a guarantee of the very best unabridged recordings of classic literature, partly because of the all-essential choice of narrator. With Zola, translator and narrator have the problem of the characters? language. Leighton Pugh is as accomplished with reading French names and expressions ? not by any means a skill shared by all narrators ? and in creating a rough accent for the Montsou pit workers. To have made them identifiably London, Irish, Newcastle or West Country would have interfered with credibility. As it is, they speak an unspecific Northern English which comes across as entirely authentic and believable as Montsou pit-workers.
Rachel Redford, Audible 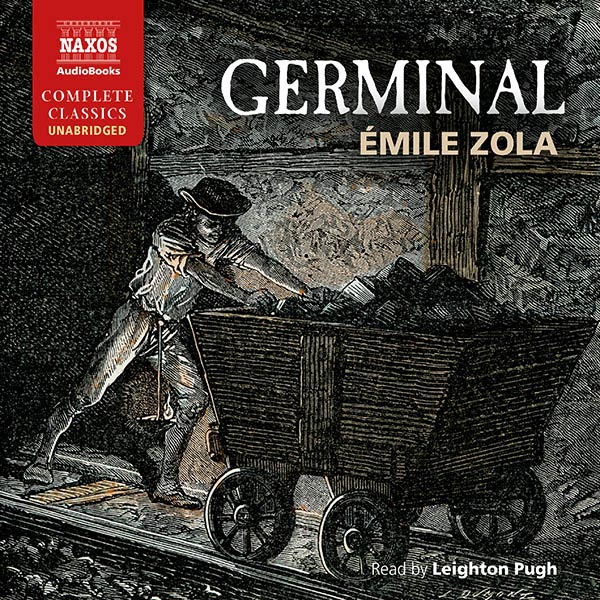