Dorothea Brooke is an ardent idealist who represses her vivacity and intelligence for the cold, theological pedant Casaubon. One man understands her true nature: the artist Will Ladislaw. But how can love triumph against her sense of duty and Casaubon’s mean spirit? Meanwhile, in the little world of Middlemarch, the broader world is mirrored: the world of politics, social change, reforms; betrayal, greed, blackmail, ambition and disappointment. Dorothea Brooke is an outstanding heroine; Middlemarch is filled with characters that are vivid and true, comic and moving. It is one of the greatest novels in the English language.

Middlemarch has something for all grown-ups, and [Juliet] Stevenson?s reading makes all the somethings that much better.
Joanna Theiss, soundcommentary.com

Juliet Stevenson is unmatched in her narration of George Eliot?s sweeping novel, which puts a lens to the fictitious English town of Middlemarch. Eliot?s complex plot takes the listener into various households and lives, revealing scandal, secret longings, and unexpected ties. Stevenson?s pleasant, friendly voice makes this relatively lengthy audiobook a listening delight. She enhances the narrative passages through her consistent enthusiasm and ease of language. Capturing the voices of Eliot?s characters adeptly, Stevenson shifts flawlessly from gruff elderly bachelors to flirtatious young women. She displays a keen ability for a range of British accents, perfectly sorting the servants from the aristocracy and everyone in between. Stevenson?s execution heralds the triumph of female spirit that Eliot embodies within this literary classic.
D.M.W., AudioFile

Having read her way through the Austen oeuvre, Juliet Stevenson now makes her mark on another Eng. Lit. classic, with a performance of Middlemarch that creates a vocal landscape of tones and accents: a highly sympathetic interpretation, given Eliot?s emphasis on the qualities that her characters? voices reveal about them. Eliot?s ambitious study traces the causes and effects in a single Midlands community of the great upheavals in England?s economic, social and political life in the 1820s and 1830s. The writing is often gloriously comic ? a deathbed, funeral and will-reading sequence is particularly entertaining ? but for the modern reader it is the vivid misery produced by the m?salliance between clever but priggish Dorothea Brooke and the desiccated scholar Edward Casaubon that compels most powerfully.
Karen Robinson, the Sunday Times

Whether new to this classic 19th century novel or familiar with George Eliot?s elegant examination of English provincial life in the 1830s, listeners should not miss this splendid performance by actress and seasoned narrator Juliet Stevenson. Eliot uses multiple intertwined plots?the philosophical and romantic pursuits of Dorothea Brook, her uncle?s bid for Parliament, the tribulations of enterprising doctor Lydgate as he struggles to reform medical practices of the day while suffering an unfortunate marriage, and the unexpected alliance between Mary Garth and Fred Vincy?to address issues of her time from the rights of women to the institution of marriage and political reforms. Many other side stories and complications fill Eliot?s pages resulting in a novel rich in intriguing characters, both good and bad. Stevenson?s clear tones and precise accents transport listeners back in time and into the lives of the denizens of Middlemarch. Aged scholar Mr. Casaubon?s tedious pronouncements are made in a thin, whining voice that reflects his mean-spirited, pedantic nature. In contrast, Dorothea?s bright and crisp alto brims with energy and life. The other voices are equally distinctive and Stevenson?s incisive vocal portraits reflect the nature of each character. Mr. Brooke speaks quietly in slowly thoughtful and removed tones; Lydgate?s voice mirrors both his earnestness and his ultimate disillusionment. Fred Vincy is all sophomoric enthusiasms, while Caleb Garth?s stolid laborer?s drawl underlines his innate common sense. Among the women Rosamond Lydgate?s cool, self-centered, disparaging comments contrast neatly with Mary Garth?s sweet nature and sensible grasp of every situation. Stevenson?s elegant, heartfelt narration catches us up in these lives that explore Eliot?s social and moral concerns. Her sublime narration reflects every nuance of Eliot?s elegant prose. A stellar addition to Naxos? collection of classics on audio.
Joyce Saricks, soundcommentary.com 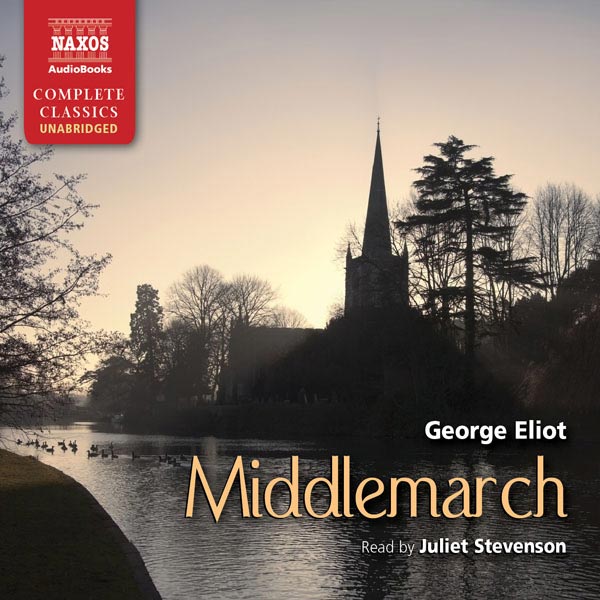