Two couples, two marriages; both seemingly perfect, both falling apart. Beneath the surface gentility of the American John Dowell with his wife Florence and the landed grace of Edward and Leonora lie fictions and deceit. There are secret desires, hidden power-games, suicides and madness. Everyone is hiding something; even the narrator can’t be trusted. Brilliantly inventive, tragic and ironic, The Good Soldier is one of the great novels of the twentieth century.

Whether you know Ford Madox Ford?s The Good Soldier or not, don?t miss this reading by Kerry Shale, who varies his performance brilliantly as the story shifts from platitudes to a rollercoaster ride of intimate revelation. Written on the eve of the First World War and satirising the complacency and immorality of the age, the book is an experimental narrative, moving to and fro in time with explanations inserted as if recounted to a friend. ?This is the saddest story I have ever heard? is the opening line, but within seconds we are wondering how on earth it can be as we hear of the impeccable social credentials of the two couples at its core. Give it a few minutes, and you will be agog, uncertain whether to laugh at its first-person narrator?s gullibility or cry at the tragic outcome. Poetically resonant and painterly in its word pictures, the book was regarded by Ford as his best. Don?t be misled by the studiously ironic title: the only conflict in the story is that between the sexes.
Christina Hardyment, The Times

?This is the saddest story I have ever heard? has to be the best opening sentence of any novel ever written, doubly so when you discover that it is also totally misleading. Confusion, said VS Pritchett, was the mainspring of Ford?s art as a novelist, and nothing, surely, confuses more than having your story told by an unreliable storyteller. John Dowell, The Good Soldier?s narrator, makes Tristram Shandy sound like a beacon of clarity. Ford?s greatest novel, set in 1904, follows the nine-year acquaintance of two couples, the American Dowells and the oh-so-English Ashburnhams, who meet every summer at a fashionable German spa frequented by transatlantic millionaires and Edwardian Eurotrash. Mrs Dowell and Captain Ashburnham have heart conditions ? the medical sort ? but it soon becomes apparent that, beneath their conventional formality, all four of them have heart problems: the kind associated with passion, jealousy, infidelity, treachery and, in this instance, the violent deaths of two of the protagonists. Far from being a detached observer as that first sentence implies, Dowell is at the very centre of the drama. Here?s where a good reader (and Kerry Shale is one of the best) gives audio the edge over print. His characterisation of Dowell is breathtakingly subtle: the cultured, only just discernible American accent (Dowell comes from Pennsylvania, where ?there are more old English families than you would find in any six English counties taken together?), his disarming confidentiality (which in truth is nothing of the sort), and above all his laugh. Never was a laugh less careless, more calculated to deceive. Listen, and I guarantee you?ll be as dazzled by Shale?s performance as I was.
Sue Arnold, The Guardian

Ford Madox Ford?s The Good Soldier, a novel of desire, cruelty, madness and the rigid snobbery of the Edwardian era, concerns the American Dowells ? John and his delicate wife Florence, and the Ashburnhams, ex-soldier squire Teddy and his suffering spouse Leonora. John calls it ?the saddest story I have ever heard?, but the tale turns out to be a shocking inventory of the appalling things people can do to each other in the name of love. What really went on during their annual sojourns at a German spa only becomes clear as the story unfolds. Kerry Shale?s performance is intimate and compelling, and the listener is gripped by Dowell?s bitter little laughs as he reflects on the perfidy of others, or when he is on the brink of holding back sobs at his own fate. 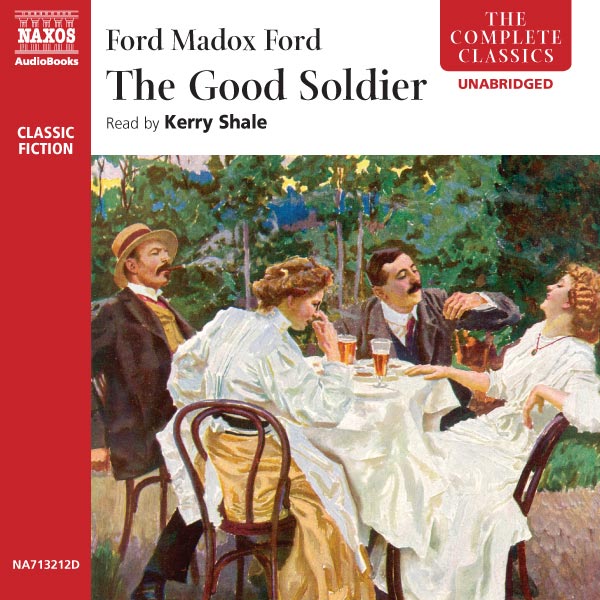