Here are the six final stories from The Innocence of Father Brown relating the crime-solving adventures of a rather unconventional detective. Having accumulated wisdom and empathy from years of listening to the dark confessions of his parishioners, Father Brown is able to solve mysteries in a flash that confound all others. Here is an eccentric and loveable character that will appeal to fans of the legendary sleuth, Sherlock Holmes. The stories are engagingly read by David Timson. The Wrong Shape, The Sins of Prince Saradine, The Hammer of God, The Eye of Apollo, The Sign of the Broken Sword and The Three Tools of Death.

Great detectives in printed fiction (forget about those created for television) are sometimes hard to tell apart. Sherlock Holmes is unmistakable, but he might be mistaken for Poe's Dupin of The Murders in the Rue Morgue by one unfamiliar with both. Nero Wolfe is unique, seldom leaving his office and depending on reports from his assistant. Another one-of-a-kind sleuth is the Catholic priest, Father Brown.
He appeared for the first time in 1911 from the pen (or typewriter) of G.K. Chesterton. Unlike other detectives being invented at that time, he does not look so much at clues as at the way people act. Being a priest, he has heard enough confessions to give him an insight into the thinking patterns of criminals. Of course, Chesterton is careful to supply enough information for his character to put the pieces together, sometimes beyond the bounds of reason.
For example, in one tale Brown prevents a crime by analyzing the pattern made by a series of footsteps outside a door! In another, he realizes that because a man is found with an arrow in his back, it did not have to come from a bow. And so on. Religious matters are used only to further the plot, not to convert a character or the reader.
So at present, I am having a wonderful time listening to two Naxos boxed AudioBooks titled The Innocence of Father Brown, Volumes 1 and 2 respectively.
The first includes unabridged readings of The Blue Cross, The Secret Garden, The Queer Feet, The Flying Stars, The Invisible Man, and The Honour of Israel Gow. The second holds The Wrong Shape, The Sins of Prince Saradine, The Hammer of God, The Eye of Apollo, The Sign of the Broken Sword, and The Three Tools of Death. Each is as much fun as the title, with added spice provided by the master thief (soon to reform and become a detective) Flambeau and the intrepid (but soon to go too far) French detective Valentine. But in such recordings, much depends on the reader; and here, veteran Naxos narrator David Timson does his usual splendid job in keeping the pace moving and the listener riveted.
Frank Behrens, Art Times, Brattleboro Reformer, Bellows Falls Town Crier, Keene Sentinel

Volume Two of this fine audio series contains six more of Chesterton's Father Brown tales from "The Innocence of Father Brown" collection. In the short booklet that accompanies the audio disks, J.D. Evans mentions that Chesterton's tales often concern madness and its link to evil. These six stories illustrate this theme. In each of these tales, Father Brown solves some mystery by combining his knowledge of the capacity of humans to do evil deeds with his powers of observation and his reasoning abilities. Chesterton weaves his tales in such a way that Father Brown can cleverly deduce the real state of affairs in the face of circumstantial "evidence." In these six tales, Father Brown proves that a suspected suicide is actually a murder; that a suspected murder is actually a suicide; that a suspected accidental death is actually a murder; that a legend about a military hero is a cover-up of treason; an imposter was killed in a duel; and that the most obvious suspect did not commit a gruesome murder. As in the first volume of this series, David Timson's semi-voiced reading is excellent. Timson has made more than 1,000 broadcasts for BBC Radio Drama and has read the entire Sherlock Holmes Canon for Naxos Audio. He makes good use of a broad range of accents and voices here to capture the wide variety of aristocratic and working class characters.
Hugh M. Flick, soundcommentary.com 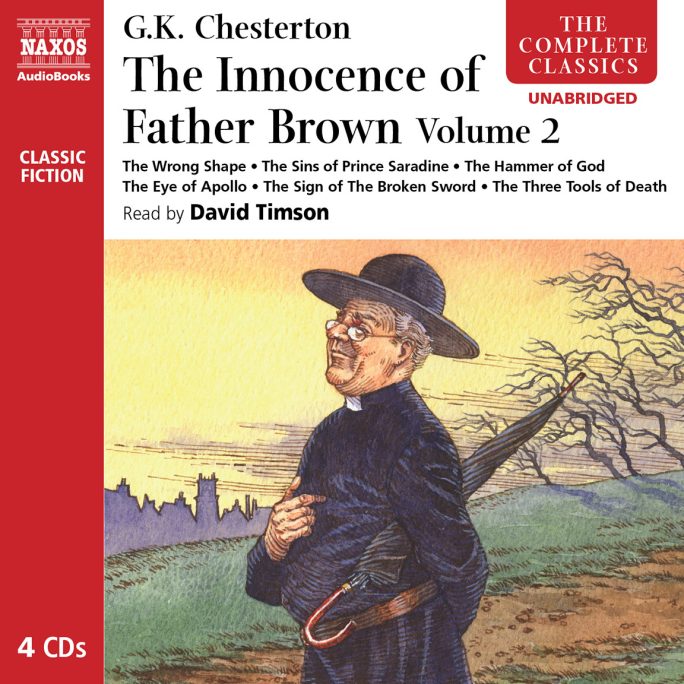