View cart “Martin Luther” has been added to your cart.

The Trial is one of the great works of the twentieth century: an extraordinary vision of one man put on trial by an anonymous authority on an unspecified charge. Josef K, 30, lives in a large town in an unspecified country. He is summonsed to answer a charge and appears in the court room for his trial. Franz Kafka evokes all the reality of trial without any of the specifics in a society that seems to have degraded into chaos: squalid environment, rats, yellow liquid shooting out of a hole in the wall. Guards, claustrophobia, anxiety – this is a gripping story and an allegory of modern life. This text remains just as relevant a century after it was written.

On the morning of Josef K's thirtieth birthday, two guards enter his rented apartment and tell him that he is under arrest. He is informed that he will be sent for trial, but in the meantime, he can carry on in his job at the bank. But what exactly is K's crime? He is not a thief, yet he is evidently guilty of something, although no one seems to know quite what it is. This suffocating and surreal portrayal of bureaucracy saw Kafka challenge the modern world at the beginning of the twentieth century. This unabridged audio version offers a new translation by David Whiting, while Rupert Degas's dry reading conveys the grotesqueness of man's ability to place importance on the trivialities of life.
Kim Bunce, The Observer

Innocent man arrested, charged, detained, interrogated and ultimately sentenced for unspecified crimes against the state - the theme of Kafka's sinister classic about the powerlessness of the individual is as relevant now, more so possibly, as it was when he wrote it nearly 100 years ago. When the next film of The Trial comes out (and there's bound to be one hoping to outshine the Orson Welles and Harold Pinter versions), it will probably be called The Rendition of Joseph K. 'Someone must have been spreading stories about Joseph K,' goes the first sentence, 'because, one morning, although he had done nothing wrong, he was arrested.' This curious mixture of low-key and explosive is Kafka's trademark. Remember 'Metamorphosis', where the young man wakes up to discover, more to his annoyance than anything else, that he has turned into a beetle? Thirty-one-year-old Joseph K seems more concerned that his arrest will make him late for work - to start with, at least. But, as the plot thickens to the same obfuscating density as the fog in Bleak House, and more and more demands are made on him to appear before mysterious officials who might have wandered in from Nineteen Eighty-Four or Alice in Wonderland, the tension and terror mount. Surreal, banal, sexy, funny, terrifying - it's all of these and more, and the end, inevitably, is ghastly. This new translation by David Whiting, commissioned exclusively for audio, aims to make the text more immediately intelligible to the listener, which basically means cutting out some of the repetition and substituting proper names for pronouns so that you know who is talking. The unrelenting nightmare terror remains intact, reinforced by Rupert Degas's extraordinary reading, best described as controlled teetering on insane. A truly stunning performance.
Sue Arnold, The Guardian

In Kafka's iconic novel, bank functionary Josef K., arrested on unspecified charges, is swallowed up by a bizarre legal system with incomprehensible motives and purposes - a mix of Carrollian absurdity, Eastern European oppression, and nightmare. Rupert Degas's voice acting is understated and telling. His tones are varied and expressive, but appropriately grayed or minor keyed, giving the impression of an intimate, dreamlike, and vaguely threatening whisper. The reading is very British - with names pronounced as German (with an excellent accent), including K. pronounced as 'KAH'. That choice, whilst linguistically correct, may result in listeners missing the significance of Kafka's choice of the initial 'K' as displayed in text. Still, the fine blend of performance and text is a menacing, seductive cocktail.
W.M., AudioFile 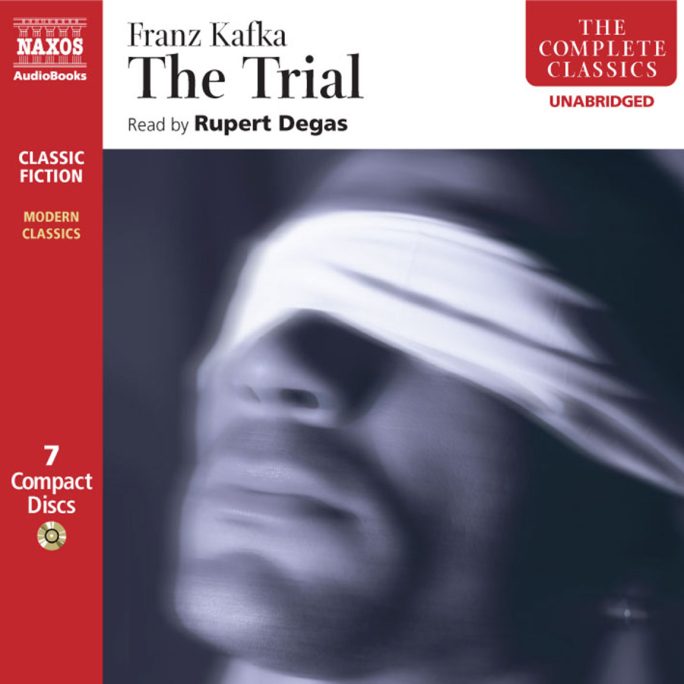