Father Brown is an eccentric priest with his own particular ways of dealing with crime. David Timson, having completed the whole of Arthur Conan Doyle’s Sherlock Holmes canon – a remarkable achievement – turns his hand to the genial but certainly not innocent priest! This collection contains a group of stories from the Innocence of Father Brown, told unabridged.

David Timson is one of those audio-book readers who, rather than giving a "signature" performance like some of the big stars of the genre, simply inhabits and projects his subjects with a delicate empathy, so it's the book and its characters that linger in the mind. Which makes him an excellent choice for G.K. Chesterton's tales of the unassuming Catholic priest who claims that his work at the confessional (where he has to do "next to nothing but hear men's real sins") puts him in an excellent position to solve the bizarre crimes that come his way in pre-first-world-war England. Chesterton's prose can be as ostentatiously extravagant as an Edwardian grandee's moustache, and is marred by a breezy anti-semitism. This, though, does not seem to be shared by the unassuming cleric, whose humble conviction that his God will eventually triumph over the souls of even the most evil of criminals is the quiet but insistent heartbeat of these unusual exercises in detective fiction.
Karen Robinson, The Sunday Times

Great detectives in printed fiction (forget about those created for television) are sometimes hard to tell apart. Sherlock Holmes is unmistakable, but he might be mistaken for Poe's Dupin of The Murders in the Rue Morgue by one unfamiliar with both. Nero Wolfe is unique, seldom leaving his office and depending on reports from his assistant. Another one-of-a-kind sleuth is the Catholic priest, Father Brown.
He appeared for the first time in 1911 from the pen (or typewriter) of G.K. Chesterton. Unlike other detectives being invented at that time, he does not look so much at clues as at the way people act. Being a priest, he has heard enough confessions to give him an insight into the thinking patterns of criminals. Of course, Chesterton is careful to supply enough information for his character to put the pieces together, sometimes beyond the bounds of reason.
For example, in one tale Brown prevents a crime by analyzing the pattern made by a series of footsteps outside a door! In another, he realizes that because a man is found with an arrow in his back, it did not have to come from a bow. And so on. Religious matters are used only to further the plot, not to convert a character or the reader.
So at present, I am having a wonderful time listening to two Naxos boxed AudioBooks titled The Innocence of Father Brown, Volumes 1 and 2 respectively.
The first includes unabridged readings of The Blue Cross, The Secret Garden, The Queer Feet, The Flying Stars, The Invisible Man, and The Honour of Israel Gow. The second holds The Wrong Shape, The Sins of Prince Saradine, The Hammer of God, The Eye of Apollo, The Sign of the Broken Sword, and The Three Tools of Death. Each is as much fun as the title, with added spice provided by the master thief (soon to reform and become a detective) Flambeau and the intrepid (but soon to go too far) French detective Valentine. But in such recordings, much depends on the reader; and here, veteran Naxos narrator David Timson does his usual splendid job in keeping the pace moving and the listener riveted.
Frank Behrens, Art Times, Brattleboro Reformer, Bellows Falls Town Crier, Keene Sentinel 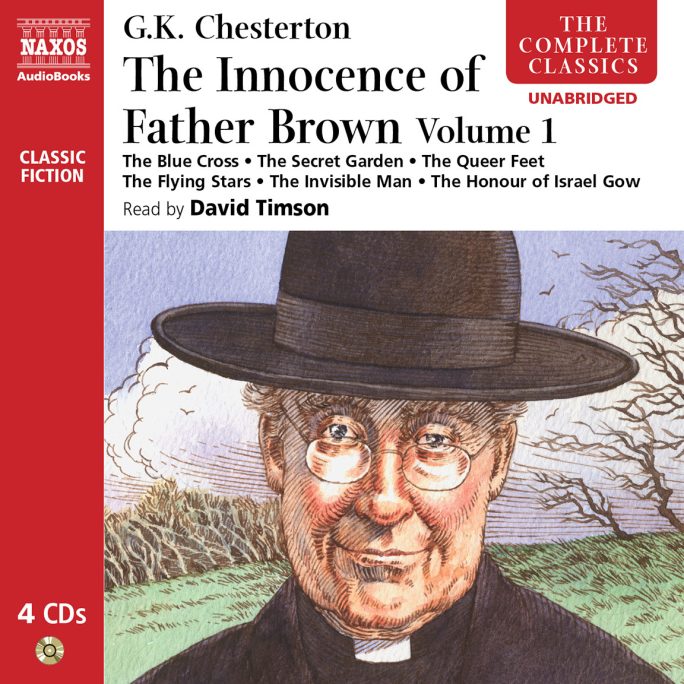